Most small business owners, as well as employees and customers, are unaware of the process that has been kick-started, especially in the state of Utah, to gradually erode the independence of small businesses. They are also not aware of the method through which they are becoming unwitting pawns in the erosion of medical freedom and personal privacy, and the fact that they are at the edge of a very slippery slope, or a sheer cliff, with regard to these questions. But it is imperative that they are made aware of the methods, so that they can address these issues with open eyes.

This is a summary of the systemic plan that is currently being used to enable this process. The simplest way for a typical businessperson to enable the plan to take place is to simply take the path of least resistance – and follow either the dictates of the orders from up top, yield to financial pressures, or yield to the peer pressure from other businesses or customer demands. It does not require a lot of deliberate coordination to allow these changes to continue, as the dominoes are set, and all it takes is a little push. Let us take a look at the dominoes.

Domino No.1: “They are all honorable men” – Chamber of Commerce, University of Utah

A heavy domino, the Salt Lake Chamber of Commerce, is among the biggest concentration of power in Utah, with heavy-hitters like Zion’s Bank, Intermountain Health Care, Larry H Miller group, Wells Fargo, Rocky Mountain Power and Dominion Energy. When the head of the Chamber, Derek Miller, states a goal like this as he did in their recent conference: “The number one priority is to vaccinate as many Utahns as possible” – that is a clear indication that the Chamber would be putting its full weight behind such a goal.

Meanwhile, along with the Chamber, folks at the University of Utah, particularly the Kem C. Gardner policy institute , have become the unelected lawmakers in the past year. They have been the authors of the Utah Leads Together plan, which has bypassed the legislature and has been used directly in most of the emergency orders of the Executive branch of Government. The Health departments have joined the lawmaking spree with their Transmission Index, backed up by the chamber-supported “Stay Safe to Stay Open” campaign.

Doublespeak alert: Stay Safe to Stay Open sounds warm and fuzzy… as it is supposed to. In reality, it simply means “follow the extra-legal health mandates, else you will be shut down”.

This is the most ingenious method of assuring compliance to executive overreach ever devised. It assures compliance because a typical business which has been hit hard by the dictates of the executive, is now offered federal funds by the very same dictates of the executive, to assuage the damage, and will therefore not revolt against the illegal shutdowns. But it is with a BIG caveat:

To see this clearly, imagine the following: You are sitting at your lemonade stand, selling lemonade that gives you your only livelihood. A passerby “cries wolf”, scares away all your customers, assures you that there is great danger, demands that you close down, and issues fines if you don’t. When you complain about your livelihood, the passerby agrees that you can open, but with only half the amount of lemonade, and on top of it, offers you a loan with more strings attached, which you will have to repay with interest and extra taxes. In other words, you are now supposed to pay out of pocket to stay open. You agree, because the alternative is to starve. Perhaps if you behave well and jump through hoops, the loan may be forgiven. If you don’t pay, the government may end up taking over your lemonade stand! Except for the “stay safe” slogan, the actions of the passerby exactly match the working of a mafia, who would demand money to “allow” you to keep your business. When you finally realize that the virus has a very low death rate, it is too late – you are already on the hook. The tsunami of PPP money has been irresistible.

The flood of PPP loans has been triggered by probably the greatest private public merger in history, as BlackRock Investments – the fourth branch of government – created the PPP loan process (this firm and its friends had come out on the top after the 2008 crisis). Most small businesses are too concerned about survival and jumping through all the hoops of the loan application to realize that the mafia is fleecing them simply for owning a business. For everyone’s safety, of course.

Doublespeak alert: Private-public partnership = crony capitalism plus socialism. Large business interests (e.g. the Chamber of Commerce) dictate to government, and government dictates to small businesses, who groan under the pressure.

Doublespeak alert: Receiving stimulus checks/relief package = biting the hook. It does not stimulate anything, but gets you to agree to pay the interest. It is like suffocating someone until their lungs collapse such that they cannot breathe, and then putting them on a ventilator to “help” and “stimulate” them and give them “relief”. 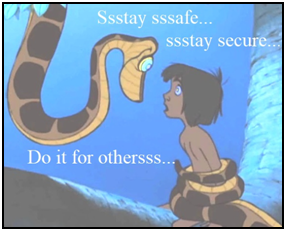 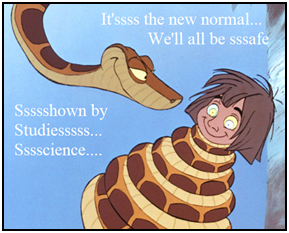 Fear of death coupled with the desire for safety and comfort is one of the deepest desires of people. The desire to “appear good”, where “doing the right thing” gives one a subtle feeling of superiority and feeling good about oneself, is another powerful temptation. Combining the two gives a potent mixture which polarizes the society and no amount of rational argument can dislodge: “stay safe to help others”. When this propaganda was unleashed in March 2020 with the help of exaggerated computer models that predicted millions dead, almost all the small businesses immediately yielded and shut down. Billions of people voluntarily imprisoned themselves.

Most business owners are not scientists. What they did not expect was the gradual mandating of medical decisions through the back door in order to “reopen” – enter the mask. Unlike a few (like this business owner’s excellent summary on masking ), they do not have the time nor the inclination to study the effects of masks, and are satisfied as long as the government and media state the magic mantra of the day:

This, along with some enforcement by the health department and customer demand, is all that is needed for most small businesses to mandate “doing Y” as their “private policy”, which can be anything from wearing a mask to taking a vaccine to any number of health choices usually made by the employee or customer.

Doublespeak alert: Mask/Vaccinate to Reopen = parole for good behavior. As long as the focus is only on what has to be done for reopening, no one questions why and how they were “imprisoned” (shut down) in the first place. In reality there is no need to jump through any hoops to reopen, one can simply reopen.

Domino No. 4: “We want to get out of the way” – Government collaboration.

After the government’s enforcing of heavy mandates with nearly a 100 executive orders on businesses and interfering deeply with the operating of businesses for almost a year, the Utah government has recently made a surprising U-turn:

Since the other dominos are already in place, the government getting out of the way and changing regulations at this time is to streamline the following newly-forged chain of command:

By removing blockages in government agency bureaucracy, the merging of big business and government would be made even more entrenched, and it would become easier for policy changes made at the Chamber of Commerce level to be enforced on to small businesses. For example, when gigantic stores like Costco decided to enforce the mask policy, it created a social wave that pushed several small businesses to follow suit. The government had very little to do in this process. This is the prototype for the new “streamlined” system, where the big businesses can directly affect small business policies with the government either subtly supporting or simply watching on, and shrugging -- “Oh, it is a company’s private policy, nothing we can do about it!” That way the businesses can be the ones pushing, say, an experimental vaccine, which is a bad idea in multiple ways.

As a side note, that could have been an argument for slavery back in the day, as most cotton merchants had their own “private policy” after all. Protection of rights in commerce, regardless of medical choices, IS the job of the government. The place where the government is withdrawing now is precisely where its presence is most needed. And the place it interfered for the past year is precisely where it should have stayed away .

Domino No. 5: “Oh, but you can shop online!” – the modern segregation

Whenever someone insists on their religious or medical rights regarding what they do with their own bodies or clothes, (such as not wearing masks or, in the future, take vaccines) the businesses are being encouraged to either refuse service or ask the customer to shop online. It would have been unheard of for a Utah business a couple of years ago to enforce a face-cloth just as the Taliban enforces the hijab , but in the current situation, small businesses have begun enforcing such policies on a daily basis.

The entire experience of interacting in a business setting – seeing the friendly smiles of the employees, shaking hands, freely browsing aisles to try out clothes or pick the right food – has been removed. What small businesses do not realize is that these are the first steps in removing medical freedom and creating modern-day untouchables . Untouchability has been the scourge of civilization in many older cultures – depriving the human touch is a sure-fire way of breaking the human spirit, and is worse than any imprisonment. When that is done for medical reasons, and medical choices such as masking or getting vaccinations are mandated by businesses for taking part in commerce – the day you lose your job or cannot shop in person because you ate an unhealthy snack might not be far behind.

Anything that has to do with nourishing the souls of the people, such as seeing a face, smiling, touching, interacting in person, taking part in team activities, or traveling abroad, has been deemed “inessential”. Anything that nourishes the body or the vices is okay – it is essential. That is why we have the absurd policy that masks can be removed for eating, but not for smiling. The body or the body’s vices must be nourished, but the soul and spirit can starve. Non-essential, right? Unfortunately, a lot of small businesses are becoming pawns in this crime against humanity.

Doublespeak alert: Shop online = go to the back of the bus, you are separate but equal. It removes some rights and privileges and full access of those who don’t belong to the group, just as African Americans were segregated and mistreated until a few decades back.

With these dominoes in place, step-by-step, a medical technocracy is creeping into society. What can small businesses do, who do not wish to be part of this process? They can: